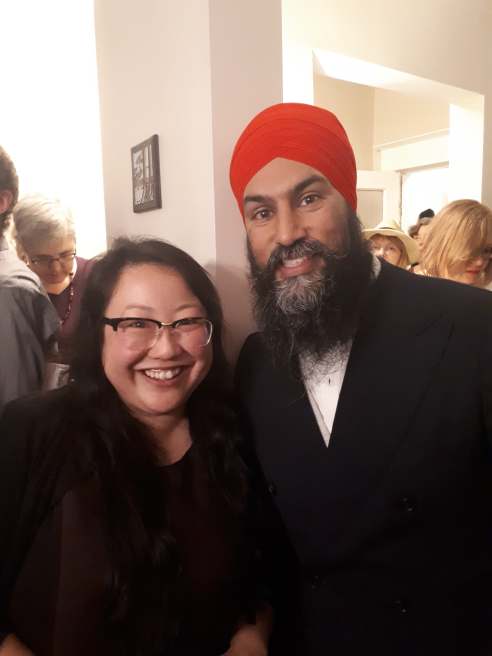 1. When did you come to Canada (year and age)? My mother was born in Ilocos Sur, Philippines and grew up on a farm. My father was born in Seoul, Korea. I was born in Canada. My name is Mae Jane because my dad first came to Canada in May and because our first family home was in a low-income apartment on Jane and Wilson Street in Toronto.

2. What are some of the reasons why you (left the Philippines) and immigrated to Canada? Why did you choose Canada above other countries? My Lolo (grandfather) was the leader in my mother’s family and had been a soldier during World War II. When my Lolo passed away, my mother decided to drop out of school to try to make money for her family by leaving the Philippines to work in Europe as a live-in domestic worker.

My father was a Korean soldier in the Vietnam War. After the war, my father wanted to make a better life for himself. Korea did not have as many opportunities so he got a job as a migrant worker on a cruise ship based in America. He eventually moved to Canada after meeting my mother.

3. Describe your experience (what was involved) in the process of immigrating to Canada? My mother worked as a live-in domestic worker and then came to Canada. My parents met through common friends who were also migrant workers. They settled together in Toronto.

4. Describe your experience of growing up, living, and/or working in Canada?  Growing up was tough in Canada. As immigrants, my parents experienced a lot of racism. People would call them ugly names and tell them to go back home. Our family also struggled with money and there was a lot of stress because of that. When we were young, we lived in low-income apartments and at one point there were 11 of us in a two bedroom apartment. We had to pay for medications, food, rent and all of the other bills. We also had to pay to visit the dentist and so I only went to the dentist a few times as a kid.

When I was really young, my parents first owned a small variety store. Some of my earliest memories was being a little kid behind the counter, grabbing packs of cigarettes, and running along the aisles. We had to grow up fast to help our parents out. My parents sold the store and bought a bar, where my brother, sisters and I would wash dishes and help out in the kitchen. They later had a Korean restaurant where we would pitch in with cooking, washing dishes, and serving customers. After a full day of school, we would often go and work until really early in the morning to help my parents.

Even though we were always working, it was hard for us to make money and to save. When I decided to go to McGill University, my parents were not in the position to put me through school and so I worked throughout my studies and received student loans. Although I knew our family was poor, my parents sheltered me from the stress of not being able to pay bills. I didn’t know how much rent, groceries, and transit really cost until I got to university and was responsible for paying for these things myself. With the added cost of tuition and student fees, I would often cry when I got my bills because I was not sure how I could finish my studies.

To make ends meet, I worked as a server, cashier, tutor, and office worker. At some points during my studies, I would work full-time to make money and go to school part-time or not all so that I could save up. I would also go to the food bank to get cans of tomatoes and soup.

Going through this experience also showed me how unequal our system was. Many of my classmates did not have any problems with money. They had all of the resources they needed to just focus on their studies and to do well. Students like myself did not have these advantages and had a hard time just getting by. It is understandable why a lot of working class students don’t continue studying after high school because they are just trying to make ends meet.

Finishing my first degree was a major accomplishment. It was really difficult to balance living on my own, working and going to school so I am very proud of this accomplishment.

Another achievement was co-finding the Philippine Women’s Centre of Quebec (PWCQ), which was a community centre for Live-In Caregivers and their families. I started this organization with a group of other Philippine women because we wanted to make a difference for our community. Live-In Caregivers are migrant workers who live in the homes of their employers to provide childcare, eldercare and care for people with disabilities. These workers often receive less than minimum wage and are abused by their employers behind closed doors. We provided support for these workers, helping them with workplace and immigration issues and leading educational workshops.

Going to law school at McGill University was a wonderful experience where I had the chance to study the Canadian legal system and human rights. Law school also gave me the opportunity to work on international human rights projects for the United Nations’ International Labour Organization and for the Ateneo Human Rights Centre in the Philippines.

I am currently working in a law firm called Ryder Wright Blair and Holmes LLP where I work in the area of workplace justice and human rights. I am so fortunate to have the opportunity to help workers everyday who are facing discrimination and abuse at work.

I am running to be the Member of Parliament at Beaches-East York because I want to make a positive change in Canada. I believe that the climate crisis is the biggest issue of our generation and that we need bold action to save our world. I also think that our country is unequal and that our government needs to do more so that everyone has the ability to live with dignity.

Words from a PASSOC Role Model

“I think growing up having no Filipino role models made it challenging to embrace my Filipino heritage. Perhaps I may have even been embarrassed of my Filipino heritage at one point, even wanting to be white like everyone else. That later went away as I got older, when I realized that having my own culture was actually a strength and gave me an edge in many circumstances.”